How To Graft Cannabis and Keep Multiple Strains. Hello, the following tutorial will give you the basics for grafting your favorite cannabis strains onto a mother plant. There are many reasons you might want to have several strains on one plant. It could be simply to save space and lighting.

The one really big bonus is you can flower one plant but have a harvest which includes two or more of your favorite strains!.  Or you might have a plant limit on the number of plants you are allowed to grow.

In any case here is the lowdown on how to create your own multi-strain cannabis mother plant.

This is one of many ways to graft cannabis but this method has the advantage of requiring very few materials and is very easy to do.

The principle of grafting in horticulture is often used to get the properties of a rootstock (root vigor, adaptation to a particular soil, resistance to drought) to that of the graft (fruit size, better flavor etc).

A good example of this is in the case of the grapevine since currently almost all the vines grown in France are grafts of French grape varieties on American rootstock that provide resistance to phylloxera, a disease that would have decimated the entire French vineyard without the transplant on resistant rootstock!

The two most commonly used types of transplants are Patch Graft :

Which is the one I will use here as it is much simpler to use and has a high success rate.

There are many other types of grafts you can use (crown, inlay, chip-building, etc.), but the split grafting is my favorite method.

How to graft Cannabis.

Our goal is to have two marijuana varieties on one plant so obviously, you will need at least 2 or more different strain varieties.

Select the branch that is going to receive the plugin, It’s important that both ends of the graft have roughly the same size diameter or the graft is slightly smaller in diameter than the rootstock. Try to select “young” branches (2-3mm in diameter) that are not too woody and especially not hollow inside which greatly complicates the healing and the good sap supply of the graft.

This is the branch chosen to receive the plugin:

The graft is a young cutting end of a similar size

Prepare the graft a bit like a cutting, leaving only one or two leaves in addition to the apex and sharpening them.
Leave only 20-30mm of the stem under the lowest leaf and cut the bevel end about ten millimeters.

Assemble both parts by “pressing” the graft into the rootstock slot until its sat at the bottom of the slot.

Hold for about 10 seconds for the glue to take hold. The graft should fit properly and there should not be “bubble” or gap between the rootstock and the graft.

Spray the graft with water as you would on a young cutting, place the freezer bag (or any clear bag of a similar size) and close the zip up on either side of the stem as close as you can to keep the moisture in. The goal is simply to create a very humid atmosphere for the graft while the graft heals. 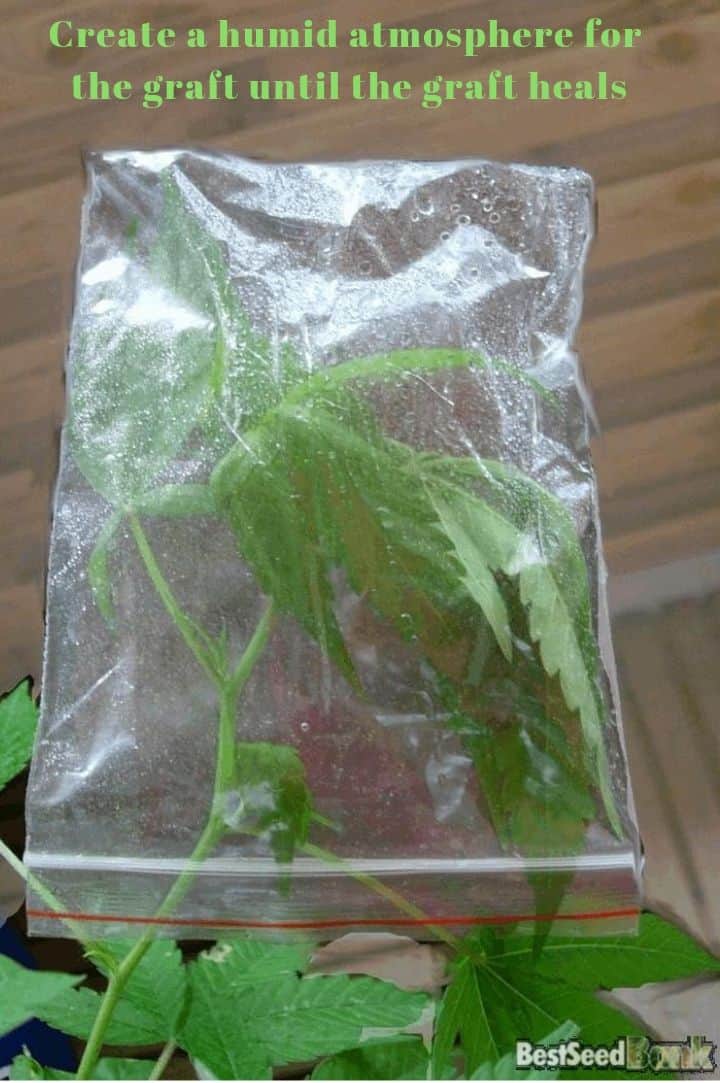 The graft is now complete, it is now necessary to wait for the two parts to heal together.

Keep the high moisture level in the bag by spraying water once or twice daily. To allow the leaves to breathe, it may be useful to cut the corners of the freezer bag to leave holes about 5-10mm in diameter which are very handy for putting a small spray on top and not having to take out the whole bag …

In addition to moisture, it is important to cut off any secondary growth under the resulting grafting point. This is because they deflect the sap necessary for the successful healing of the graft. Do not over-water the rootstock to avoid drowning the graft under too much sap flow.

After a few days if the graft is all stunted with the wilted stem (not just a little soft) it is likely that there has been a problem (poor contact with the rootstock most of the time) and that the graft is not taking properly. Remove the graft and start with a new one on a new branch or a little lower on the same branch if there is room (not in the same slot!).

Usually, in one or two weeks the edges of the slit have healed:

And the plugin starts to disappear:

So we now have a mother plant with two types of buds on the same plant. You could now proceed to do more grafts using the same technique to add more of your favorite cannabis strains onto one mother plant.

This means we can have several varieties on the same plant so less space, less watering etc …

In the case of growing outdoors, we can have more varieties but fewer holes to dig or water to bring and choosing the right rootstock can improve the resistance to drought and pests.

All You Need To Know About Cannabis Seeds

Grow Guide: Seeds and Seedlings what you need to know

All You Need To Know About Cannabis Seeds

Grow Guide: Seeds and Seedlings what you need to know